Kairouan is a city in central Tunisia, and the administrative center of the governorate of the same name. It is located 150 kilometers southwest of Tunis and fifty kilometers west of Sousse. Kairouan is the fourth holy city of Islam, a city rich in history and religious buildings that have marked the history of architecture in Tunisia. Populated by 139,070 inhabitants in 2014, it is often referred to as the fourth holy (or sacred) city of Islam and the first holy city of the Maghreb. 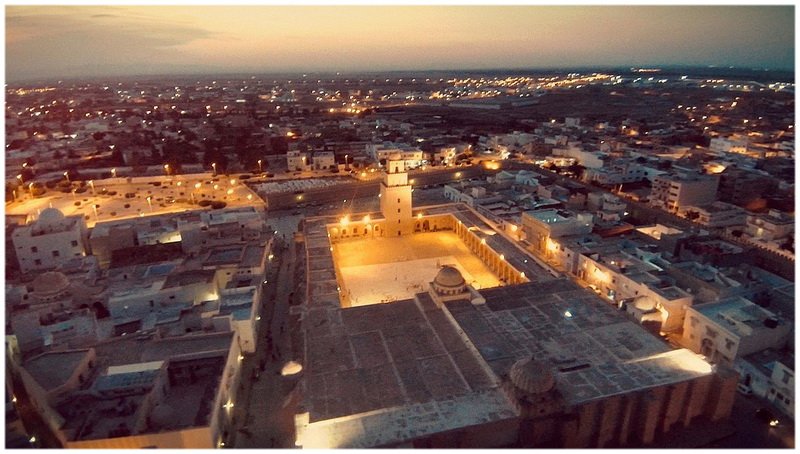 Kairouan was founded by Okba Ibn Nafaâ in 670 and built from re-used materials from the Roman ruins that littered the region, despite the hostility of the Berber populations, who revolted under the leadership of the prophetess Al Kahena. But they were forced to give in and Kairouan became the capital. He erected the Great Mosque of Kairouan, which remains one of the most prestigious monuments of Islam. The commander of the first armies that swept over the Maghreb as part of the Muslim expansions in Africa, Okba Ibn Nafaâ, established the Great Mosque in the center and founded the city next to which he installed a palace and laid the foundations for the main thoroughfare. . He distributed plots of land to his soldiers and the city then began to expand. 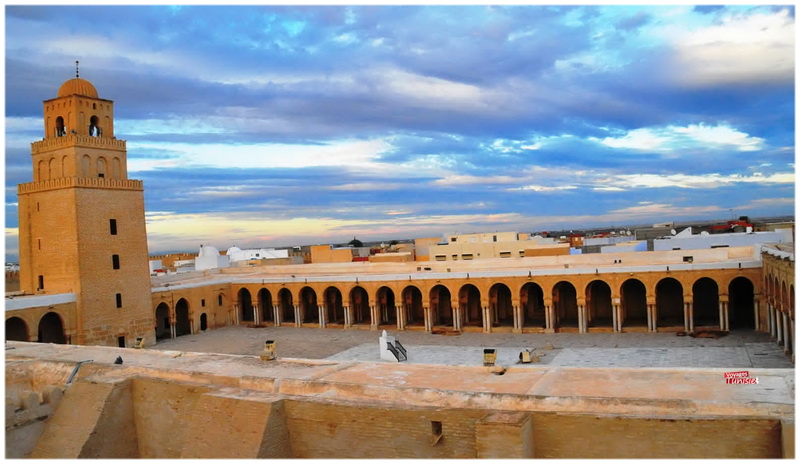 Kairouan was the first Muslim city to be built in North Africa, its cultural and scientific influence reached, from the ninth century, to the borders of Europe and Asia. In the tenth century, the diameter of the city reached 4km, and it already had more than a hundred thousand inhabitants, about fifteen arteries leading from the great mosque, in a circular configuration reminiscent of Baghdad. After a painful birth, marked by the Berber activities against the city led by the Kahéna, Kairouan prospered during the era of the Aghlabid dynasty which made it one of the largest metropolises in the Mediterranean, rivaling Cordoba and Foustat (in Egypt). 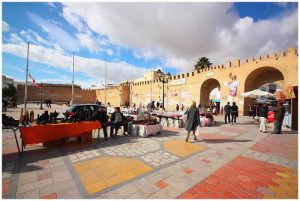 Kairouan, city of intellectual, knowledge and culture, shone throughout the Maghreb. An academy was founded there as early as the 9th century, specializing in translation, astronomy, geometry, medicine and arithmetic. But one of the salient aspects of Kairouan’s contribution was the spiritual role she played in consolidating the Muslim faith in the region. But soon came the trials.

The city resists the assaults of the Fatimids, forcing them to found their capital in Mahdia. Weakened by the civil war waged by the antagonistic factions, it succumbed to the assaults of the Hilalians who destroyed and pillaged it in 1057. The city experienced a relative renaissance with the Hafsids, in the 14th century, then with the Husseinites but without regaining its old town square. In 1861, the city covered only a quarter of what it had been and numbered only 12,000 inhabitants.

Kairouan today is the seat of a governorate; the city’s population exceeds 150,000. The current city consists of the medina, surrounded by its ramparts and modern quarters which group together the administrative services: seat of the governorate, municipality, banks, hotels, shopping center, etc.

The medina of Kairouan is a veritable living museum of Arab-Muslim art and architecture, its monuments, souks, houses and alleys still remain an eloquent testimony to its prestigious past. Kairouan has also kept a certain vocation as a holy city; it is still the spiritual capital of the country. Religious festivals take on a special charm and are celebrated with splendor. The nights of the month of Ramadhan are memorable. The city hosts each year the official ceremony of Mouled (anniversary of the birth of the prophet) which is held at the Great Mosque and at the mausoleum of Sidi-Saheb, companion of the prophet. On this occasion, the city drains a considerable crowd of Tunisian and foreign visitors. 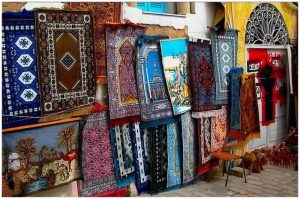 many traditional souks of the city are specialized by branch of activity: souk of wool, weavers, leather, carvers, souk of the carpet where one still sells the carpets at the auction … These souks occupy the center of the medina, but other so-called messy craft activities are placed outside the ramparts such as that of the Nhaiçia, boilermakers, tinsmiths and dyers. But, the most developed craft activity is that of the carpet, it employs an essentially female workforce. The Kairouan carpet is famous all over the world, Kairouan has always been known for its carpet craftsmanship. It is the women who make them either at home or in small workshops. The Kairouan carpet is a benchmark in this area. Part of the production is exported across all continents.

Finally, Kairouan is also an ancestral culinary art; the Makroudh, the different varieties of bread, the honey donut are only revealing examples of the richness of this Kairouan cuisine.

Kairouan is located halfway between the coast and a mountain range, the Tunisian Ridge. A network of often charming roads makes it possible to explore many points of interest, such as archaeological sites in the middle of nature or the tourist to.

Attachment of countries to Tunisian embassies in Africa